Since we are visiting a lot now that things are finally moving on our build, and we traditionally stay at least 20-25 minutes away I decided to see if I could get a static caravan. I found one on ebay, being sold by a couple who had done their place up 50kms away and who were now selling it on. We weren't the winning bidders but I sent an email immediately saying if the sale fell through for whatever reason then to please let us know as we would be keen to purchase it.

The sale fell through and we thought it was fate and meant to be. As proud possessors of a new (old) 3 bedroom static caravan, we haired off to France to check it out. It was sitting on a lovely concrete pad, all ready to go, and we thought, this will be a breeze to get out. We raced off to our local mayor to get permission to house it for a year, rushing through the request as we wanted to move it that weekend. We found somebody to move it and then when they came to look at where they were moving it to - disaster. They said there was no way it would get onto the land through the current access point (which was a tractor trail).

We had to organise with the previous owners to leave it on their land till we could get our driveway done. 6 months later, our driveway was done and we were ready to get the caravan moved. The guy who did our driveway knew a guy who transported stuff and he gave us a very competitive quote. Unfortunately that was the only good thing about the entire move.

We had put a new tyre on one side of the caravan but it wasn't properly blown up, and the other side was completely flat, so when they came to take it away they couldn't drag it. They decided to fill the tyres themselves but they couldn't quite manage it so decided the flat tyres would do the job and tried to bodily drag it.

The tractor they brought with them wasn't strong enough but luckily they knew the farmer up the road with a huge tractor who came down to give a hand (very kindly). Using brute force he managed to get the caravan off the slab, turned around and facing out onto the road but then they realised that they had to have their own tractor pull it onto the transporter as it had to go on first. They disappeared off home to get another tractor. Thankfully they were only 15 minutes down the road. Meanwhile the entry to the little hamlet had been closed off for most of the day and a little french couple thought it was high entertainment and  spent most of that time watching the shenanigans.

Finally they arrived back with their own, larger tractor, pulled the caravan onto the transporter (gouging out the main road and pulling up all corners on the caravan while doing so), only to almost loose it off the side before they got it strapped down. 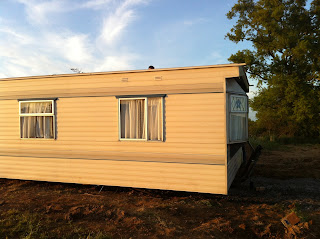 Meanwhile the next doors neighbours came out to demand that all the grass and soil that had fallen from the bottom of the caravan be cleared away from in front of their house. We set to using our hands and then moving to a space and fork that he provided. Just as well we did as a poor snake had been caught up in the bottom and had fallen out with all the grass and soil. I don't know who was more surprised. Probably the snake. 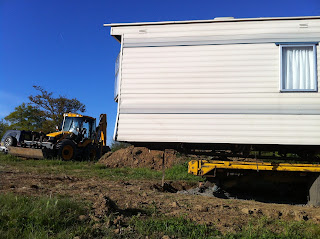 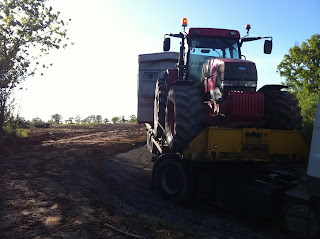 We finally arrived out our land and got the transporter backed up onto it (breaking our brand new concrete culvert as they did so). As they tried to back the caravan off the trailer bed it came off the side finally and we had to call our builder, who was on his way to a party, to use his JCB to push it back on, causing the siding on the caravan to split when he did so.

Just as the sun was going down, so 11 hours after we got started, the van was finally on the ground, with a buckled tow bar, pulled up edges on four sides, broken siding and axel deep in the soft soil of our land. As it was getting dark we requested that they level it as best they could and we would call it a day and there it has stayed, getting more slanty it seems every time. They did say they would come back and fix the tow bar when we got new tyres so it could be moved into place. At the moment it isn't hooked up to the septic or the water as it is almost impossible to get under it. Plus most of the undercarriage has had bits pulled off while it was dragged around the countryside. 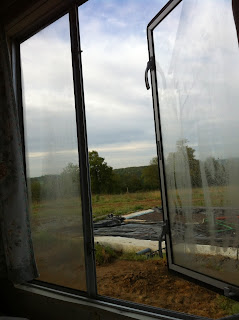 Not sure in the end if it was worth it, but waking up the first morning on the land was almost priceless :) 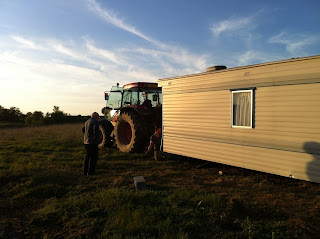